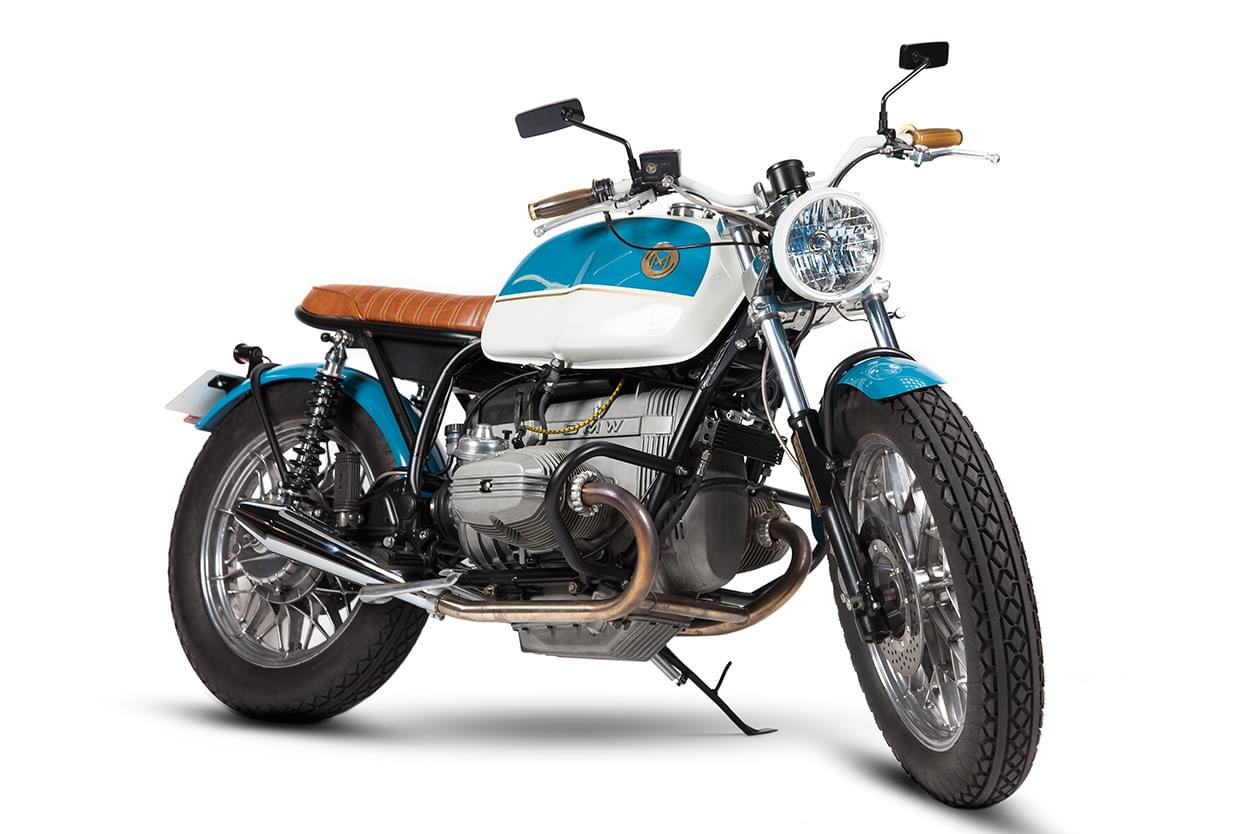 Most custom motorcycles start out stock—blank canvases for builders to splash their ideas onto. And if they’re old, a little restoration work usually comes first.

But this 1980-model BMW R100 RS was in need of complete salvation when it landed on Maria Motorcycles‘ workbench. Before they could turn it into the handsome machine you see here, they had to undo some nasty ‘custom’ work. 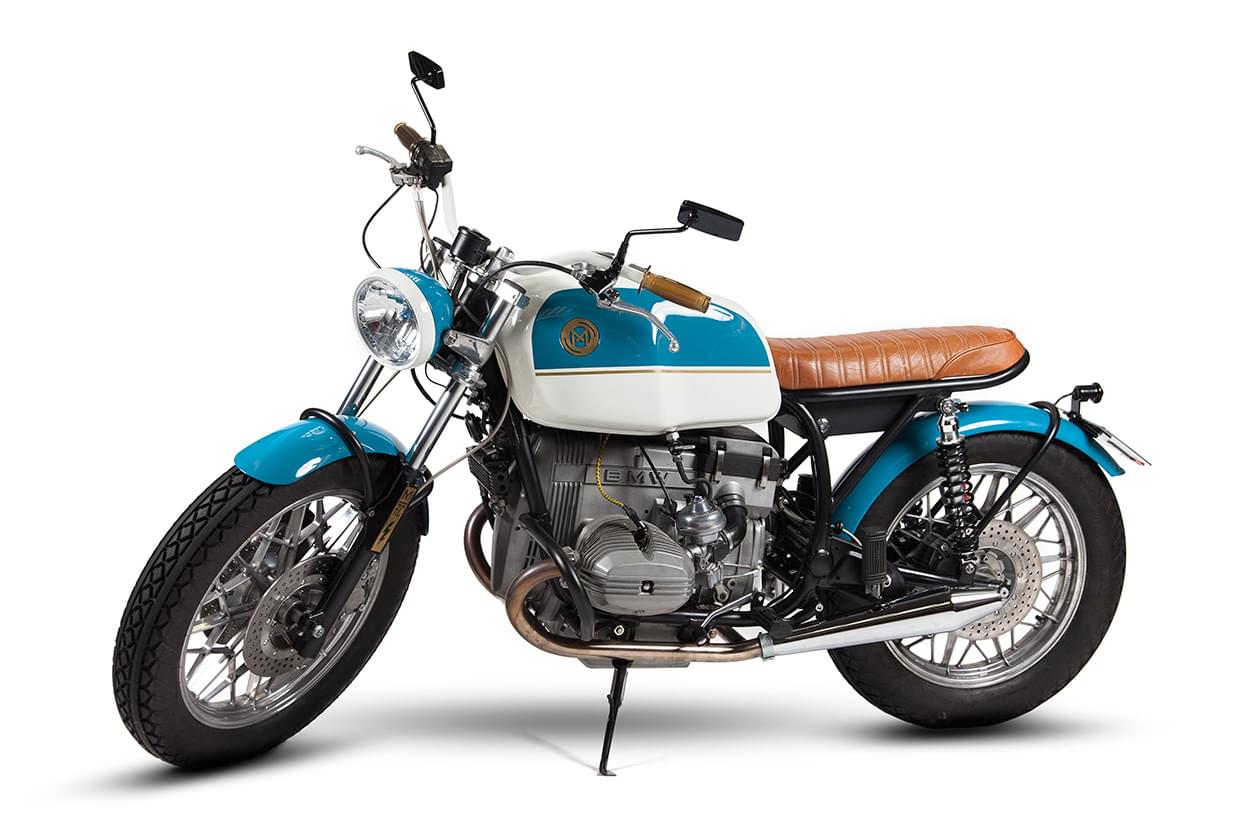 “When our client bought the bike, it already had some changes,” explains Maria founder, Luis Correia. “It was really in bad condition, without fairings and more stripped.”

“We decided to divide the project into two stages: Stage One was to recover the most out of the original parts. Stage Two was to create a classic style that fit our client’s ideal.” 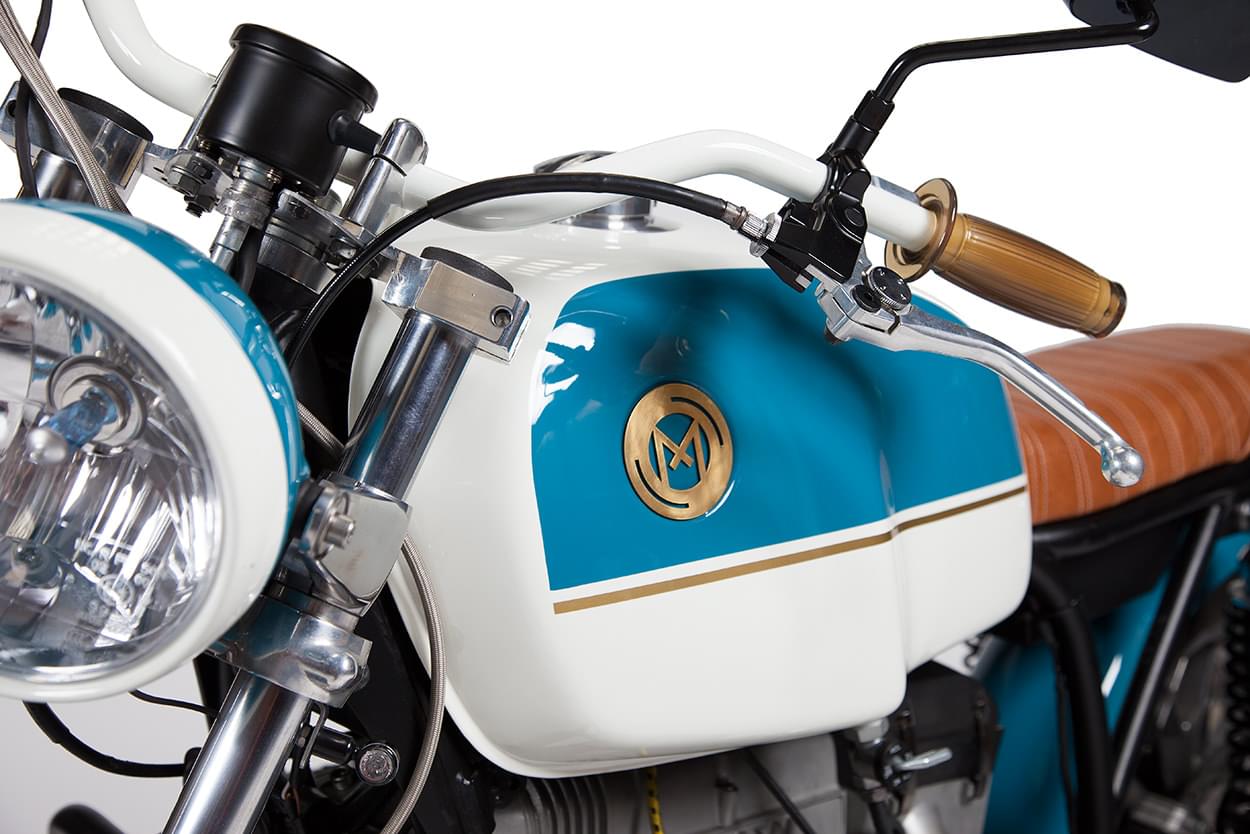 Once the Maria crew had torn the bike down, they started sorting through the stock parts worth keeping. Then they set about cleaning and polishing the aluminum bits—like the triple trees and carb covers.

“One crazy thing we did was to polish the wheels,” says Luis. “We’ve never seen a BMW with the wheels polished, and now we know why! Hours and hours of work, but we think it deserved.” 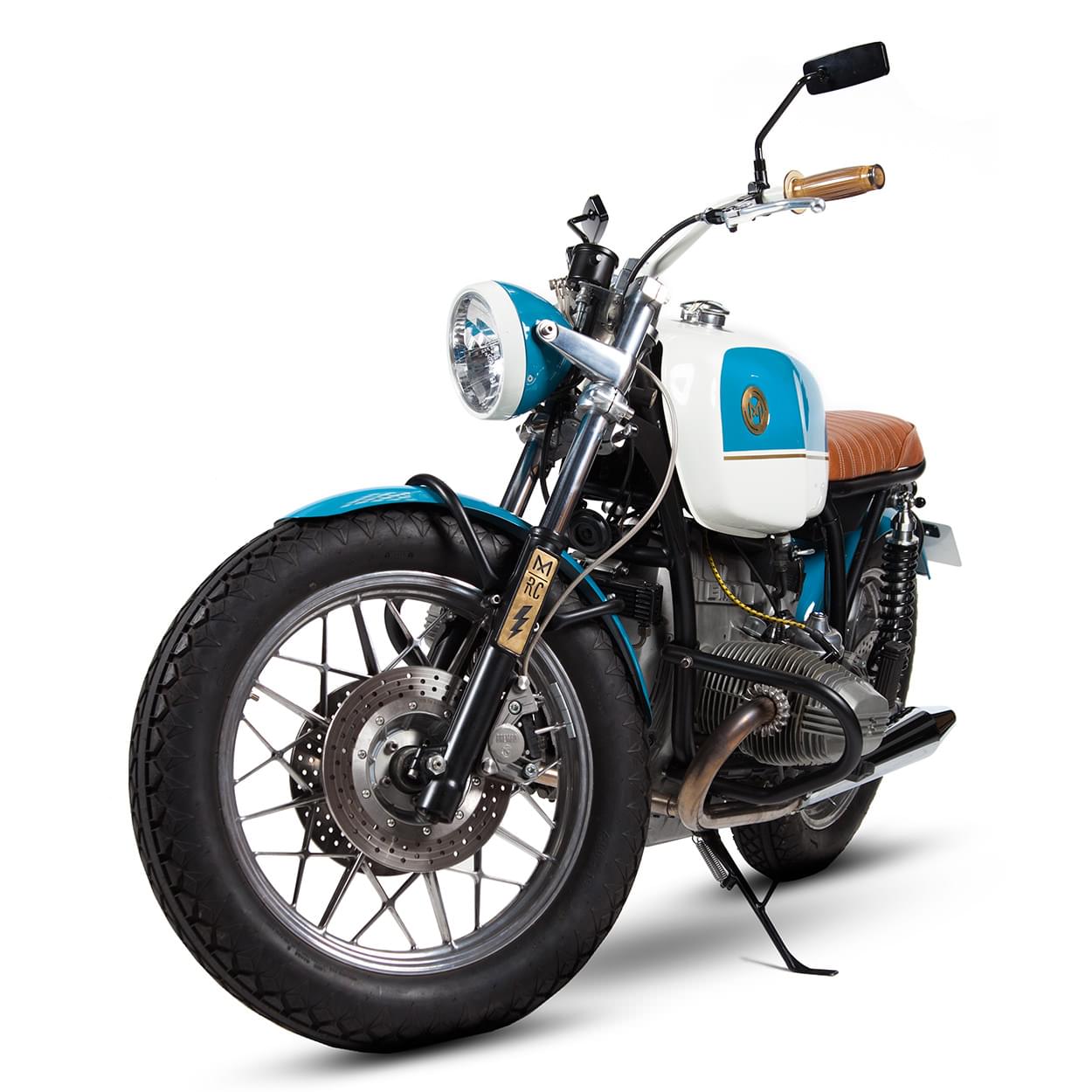 The bulk of the man-hours went into restoring the engine. Maria rebuilt it with a host of new parts, and also glass-blasted it—adding a clear coat afterwards to protect the metal and seal in the beautiful finish.

Their client’s love for old boxers stopped Maria from swapping out the tank for something smaller. But the rear-end of the bike has been reworked—with a custom-made subframe and a hand-covered sheepskin leather seat. 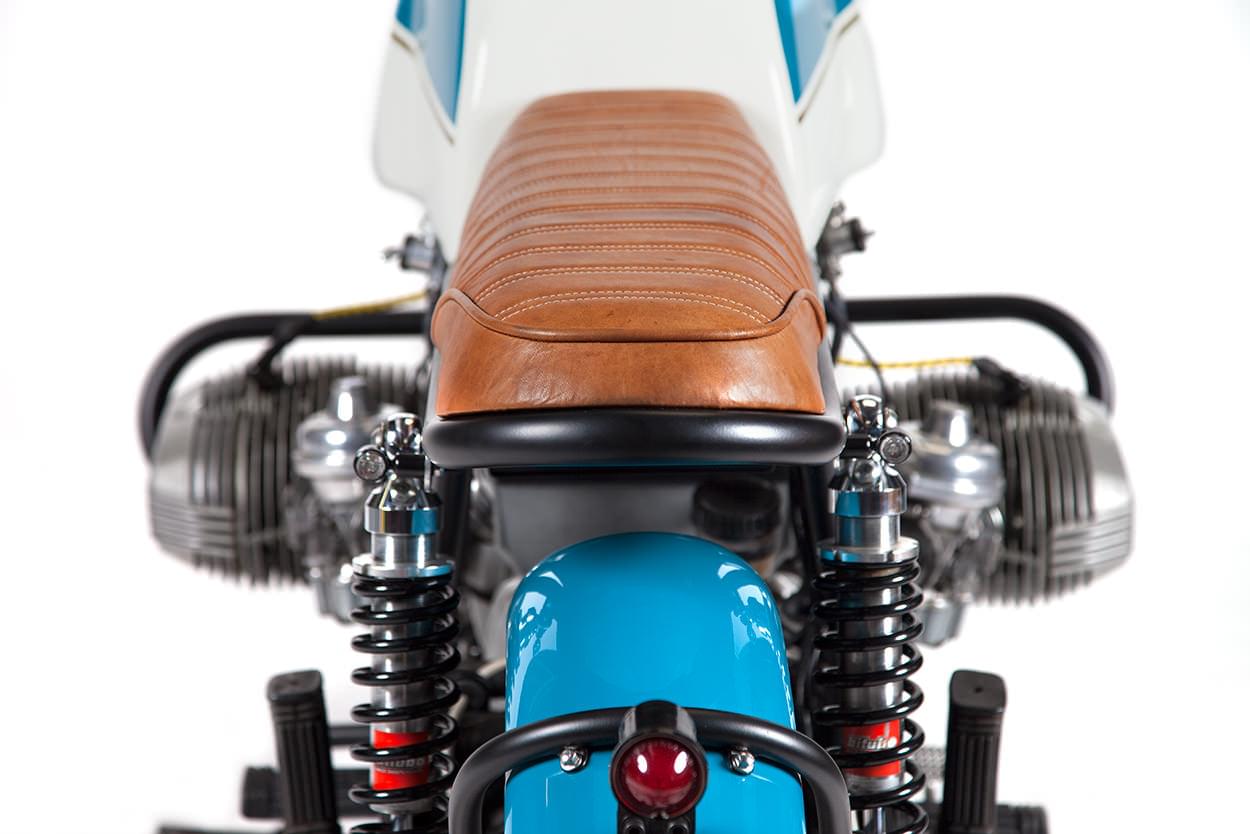 Underneath is a new electrics tray, containing a Lithium-ion battery and various components. “All the electrics were trash,” says Luis, “so we had to rebuild everything.”

The fenders are aluminum items, mounted on hand-made brackets. Mounting the rear fender using traditional stays rather than the subframe was a deliberate move, to keep the bike looking as classic as possible. 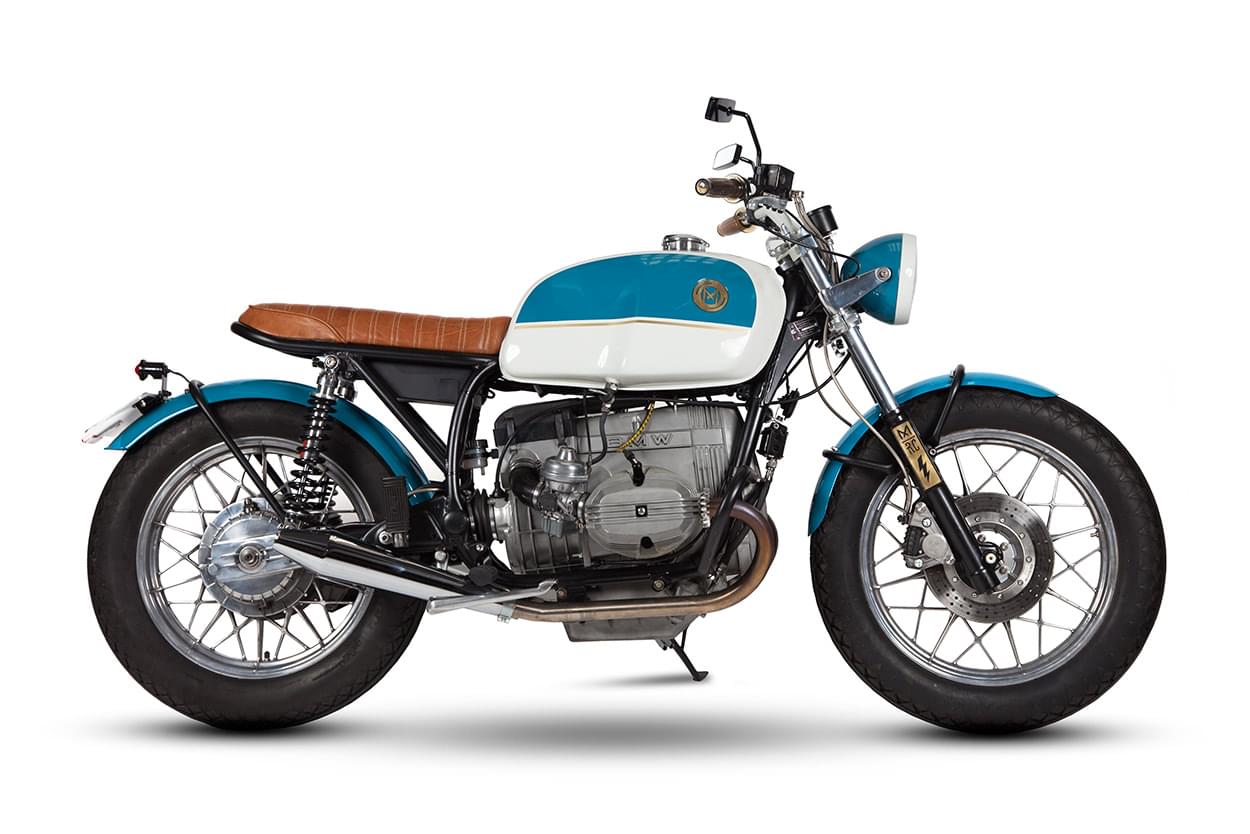 Maria tweaked the stance of the BMW R100 as well, by fitting new springs to lower the front forks. With new Bitubo shocks at the back, the ride is now much more controlled.

The tires are Diamond-patterned numbers from Coker—“Almost mandatory for this kind of bike,” Luis jokes. New front discs and Hel lines give the brakes a little more bite, while a pair of aftermarket mufflers improve the soundtrack. 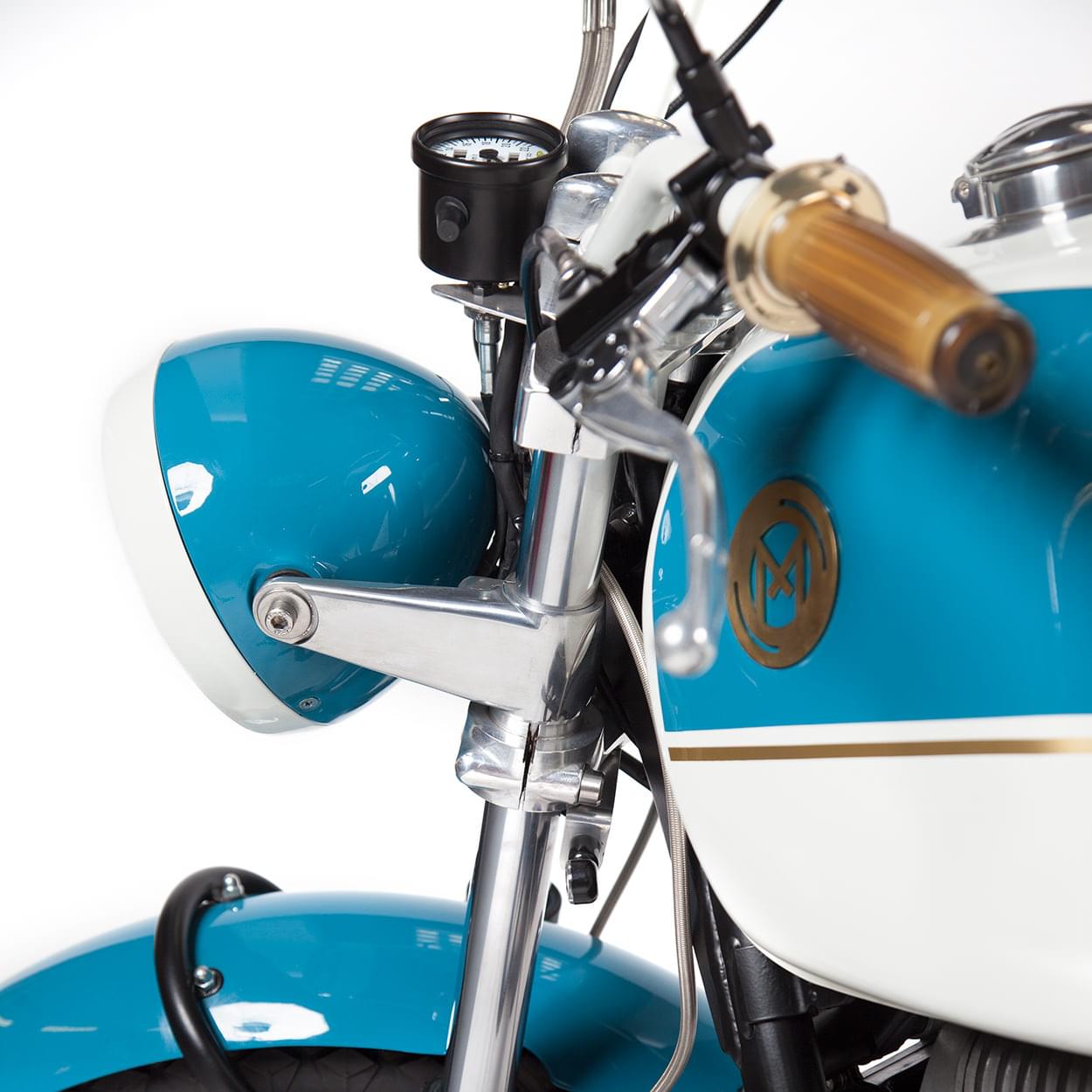 The rest of the build is an exercise in tasteful parts selection: LSL handlebars, gum grips, new lighting and a Monza gas cap. LED turn signals and a tiny speedo are mounted on hand-made aluminum brackets, and mini-switches have their wiring hidden in the bars.

Every fastener has been polished or swapped out for a stainless steel replacement. As an added touch, Maria designed and laser cut various brass details to mount throughout the bike. 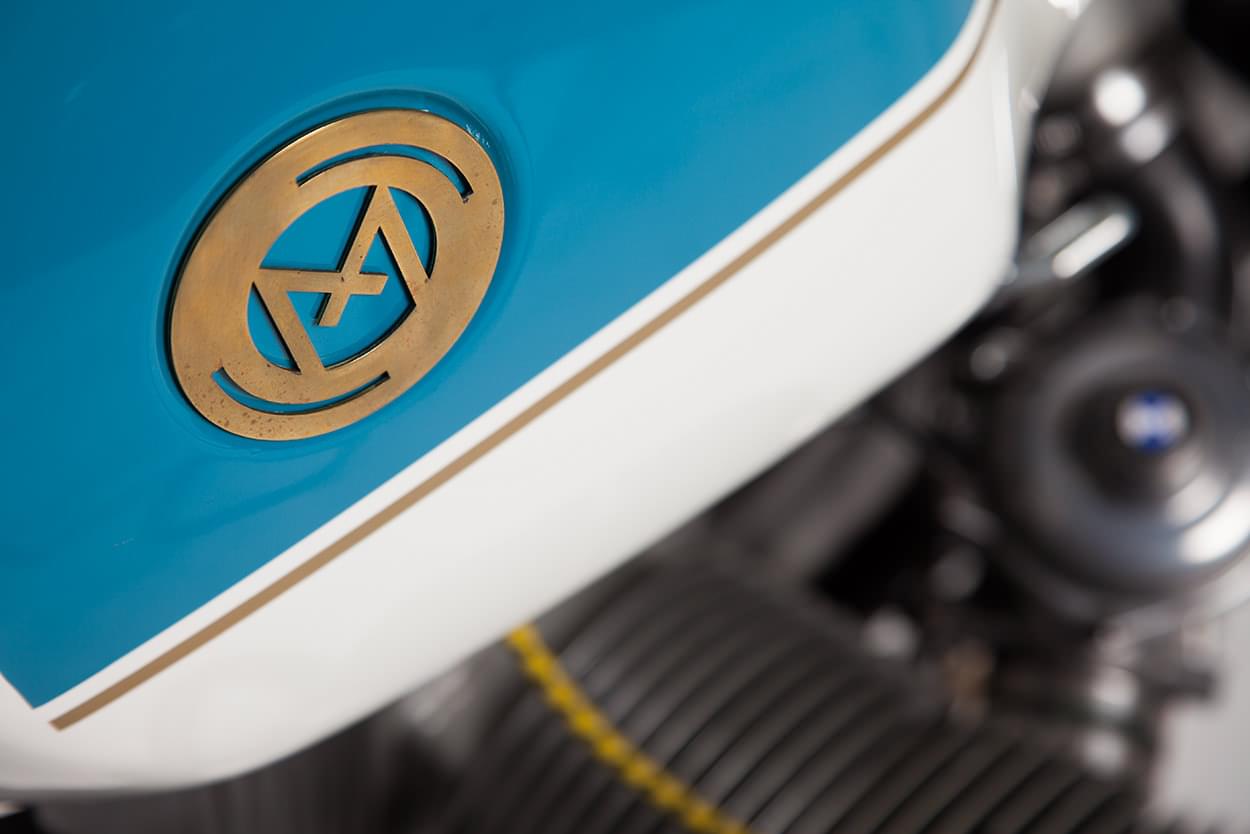 If there’s a defining feature to characterize a Maria bike, it’s the stunning paint designs. Luis explains this one: “Our idea was to mix petrol blue colors from old oil cans, and some white and gold to give a classy look. The simplicity of the lines were important, to minimize the overall heavy look that usually BMWs have.”

It works. This once-hacked airhead is now the sort of machine we’d pick for an elegant Sunday ride. Not that it’s a slouch—Luis tells us the mods have made for a lighter, more rideable bike. 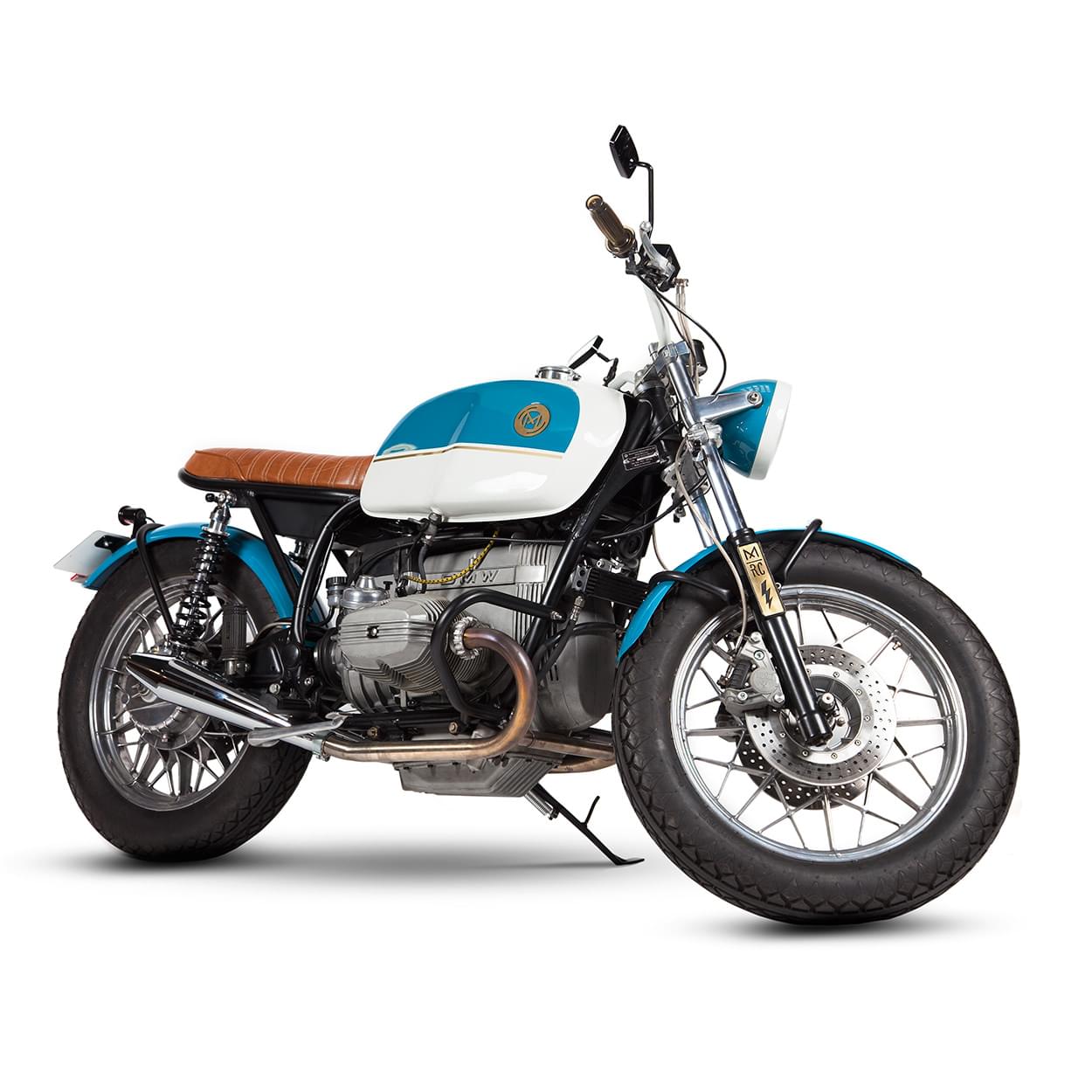 “It runs really smoothly, like a new bike. It’s really comfortable, and believe it or not, goes to almost 200 kph (124 mph). Amazing for a bike that’s almost 37 years old!”

Not bad at all. Now where did we put our Persols… 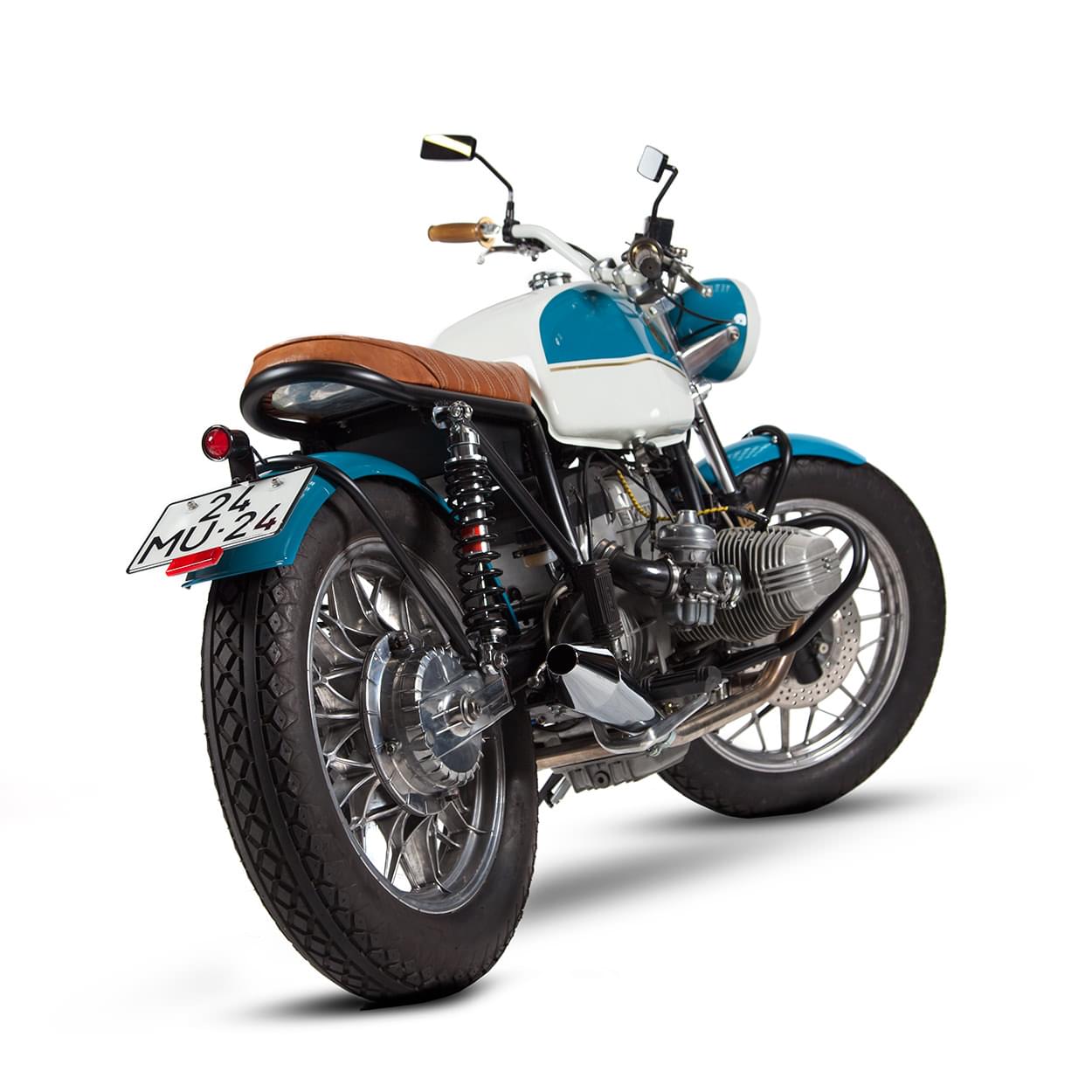