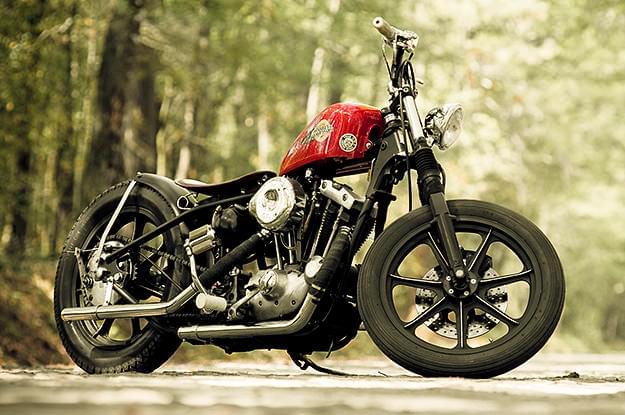 This bike grabbed my attention for two reasons. It’s a textbook modern Harley bobber, and it’s a textbook example of how to photograph a bike outdoors. Richard Dunn bought this Sportster as a basket case, “from a military kid who couldn’t ride it on the base.” It’s a 1975 model with a weld-on hardtail, and it looks just terrific. Dunn has kept the original 7-spoke Harley cast wheels—made by Morris—and fitted them with Avon rubber. But he’s rebuilt the forks and lowered them 3”, stripped all the excess trim from the bike, and mounted a custom oil tank and later model Sportster fuel tank. So it’s a true bobber in ethos, as well as looks. Adding to the aesthetics are a set of Biltwell Keystone bars with H-D risers and a top clamp, plus a kicker support from Bike EXIF favorite LC Fabrications. The rear fender is a custom-made item from Front Street Cycle, installed with a strut brace and mounts that Dunn made himself. He also fabricated the battery box, and rewired the whole bike—squeezing bare-bones electrics into an electrical box modified to fit the small space. (Electrical power comes from a Cycle Electric end-mounted regulator.) The seat is simply a Baas Metal Craft seat pan “wrapped with foam and some saddle cowhide with a tight stitch around the perimeter”. A remote oil cooler and LED tail light wrap things up. Top marks to Dunn for a beautifully balanced bike, and equally high marks to photographer Robert Shober for capturing it so well on a Nikon D90. If only all motorcycle photography was this good. 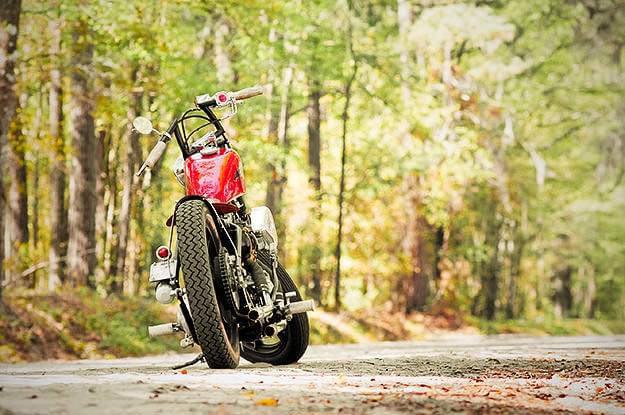